Marriage is often a source of stress and there's no wonder that a murder mystery is not that far-fetched of a concept involving marital bliss. We have created a murder mystery for marriage counseling for groups such as churches and government agencies seeking to reduce divorce rates for preparing people for the inherent difficulties of being married. Below you will read information on how this program works and how we can bring this show to entertain and educate (edutain) your group.

Note: This is not meant as a replacement for any form of therapy and is not a licensed therapeutic product. It is meant as an entertainment form that can be used to entertain and bond members of group therapy programs and possibly illuminate certain valuable facts. There are no guarantees implied and you should always consult professionals if you have any concerns. 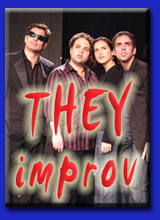 Marriage is an institution that should be preserved as best we can and its import to help couples to stay together. This has traditionally been done by our religious institutions in a variety of ways either premarital or post-matrimonial.

Premarital Courses are generally focused on education. The idea is to give both individuals a better idea of what to expect in the marriage and prepare them for what the future holds. This includes premarital courses that might be more relationship oriented, practically oriented, about budget and finance or simulations of sorts. It is important that people getting married don't go down the aisle with blinders on but are prepared for the joint journey that awaits.

For premarital courses, THEY improv has a version of the Cambridge Solution that helps to illuminate these areas and address their concerns. First, for relationship, we allow each couple to work together on coming up with a solution that both have to agree to. The questions go beyond simply who the culprit is, but includes questions about the relationships of the characters and how each of them perceives things through their own eyes. For practical purposes, the details of the murder mystery would include the mundane elements that become heightened in a marriage. Often we include some financial motives for the characters illuminating common issues that may arise in their future. Lastly, we can have the couples act out their answers instead of having them write them out. This would allow them to role-play as the characters that committed the crime, which is usually a marriage that had gone wrong.

Marriage Counseling Classes are post-nuptial in nature, usually. This means that people have already been married for some time and are having issues or are looking for reinforcement. This means that the participants usually have a passing familiarity with the concerns that married couples have and actively seeking answers for their problems. As with most marriages, it almost always comes down with a breakdown in communication or seeing things from the other spouse's perspective. Though we oversimplify, this often breaks down into four categories of major problems that lead to situations that may cause a dissolution of marriage. These include finances, families not getting along, lack of common interests (growing apart) or lack of spark (infidelity).

To deal with this situation, we have created a Cambridge Solution where the characters are two to four couples facing these issues and where the marriage counselor has been killed. One of the people out of the group committed the crime and the audience will figure it out by talking to all of them. It was the problem in their marriage that had something to do with why they committed the crime and that's the focus of the investigation. Without noticing it, the people interrogating the suspects are finding out more about their own marriages and hopefully gaining an understanding and empathy for their partner.

By playing fun murder mystery games, our audiences help learn educational elements that will hopefully benefit their lives. If not, at least everyone will have a fun evening playing games and that can often be a part of the cure to anything that ails you.

Locations. We have people already in most major cities around the country or can make arrangements if needed. This includes the top cities such as New York, Chicago, Los Angeles, Miami, Houston, Phoenix, Denver, Minneapolis, Milwaukee, Nashville, Atlanta, Charlotte and practically anywhere else you can imagine. We also have access to Canada, Mexico and the islands of the Caribbean if you would like to conduct something while at a retreat. Simply contact us to find out how we can help you.